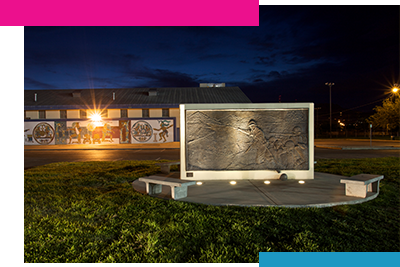 A new memorial to the Men of Company E will be located at Cleveland Square Park near the Mexican American Cultural Center and the El Paso Museum of History. This memorial will be a companion piece to the original memorial located at World War II Veterans of Company E Park at 4321 Delta. The community led the effort to site the companion memorial downtown in a location that would provide opportunities to tell the story of these men.

The original memorial by El Paso artist Julio Sanchez de Alba, is a bronze bas monument honoring the a group of young Mexican-American Soldiers from the City of El Paso who were sent to Southern Italy on a tragic mission to cross the Rapido River on the night of January 21, 1944. Many of the Men of Company  E, 141st Infantry, 36th Division, were killed in the attempt to cross a waterway saturated with barbed wire, mines, and artillery. The Museums and Cultural Affairs Department (MCAD) is working with the same artist on the companion piece.