Under Title II of the Americans with Disabilities Act, the City of El Paso is required to have a transition plan in place that addresses accessibility gaps in its existing facilities and services over a period of time until full compliance is reached.

The Accessibility Advisory Committee was established to address accessibility concerns and compliance with the Americans with Disabilities Act (ADA). The Committee also provides recommended resolutions to complaints alleging discrimination by the City based on disability.

El Paso passed Ordinance #9779, which prohibits discrimination against individuals with disabilities by the City of El Paso and recipients of financial assistance.

Following the passage of ADA, the City undergoes a self-evaluation of all city-owned facilities and services.

An updated study was completed. In addition, a self-evaluation of public right of way (Transportation Infrastructure) was completed known as the 'Martinez Study'.

A subsequent evaluation was done by Magellan Assessment and Project Planning Systems (MAPPS). This study was the basis for the latest transition plan which identities deficiencies in ADA compliance and actively seeks to remedy existing accessibility gaps. Priorities were given to each needed repair/improvement based on health and safety criteria as well as community input.

The Streets Department also completed a study of citywide sidewalks and pedestrian pathways. This information was stored electronically in a GIS (Geographic Information System) to view, process, and manage projects related to accessibility. It identifies gaps in sidewalks, sidewalk repairs, and missing curb ramps. It included locations in subdivisions that were not required to install sidewalks because they were in rural areas, areas that were recently annexed by the City, and in areas that were not yet developed.

Under the need to further enhance accessibility and a renewed effort to become more ADA-compliant, the city embarked on a new study of its facilities and services to accelerate the implementation of its transition plan.

The City performed another self-assessment in order to find out to what extent we have accomplished our previous goals on what other gaps in compliance need to be addressed. It also aimed at evaluating all of the City’s programs and services in order to have a more complete view of the City’s accessibility inclusion efforts.

Areas identified in need of immediate improvement and the efforts are already in place to be in full compliance within a calendar year or shortly thereafter.

Items may take a little longer and require scheduled funding and other resources, once completed, will allow our City to be 100% compliant. 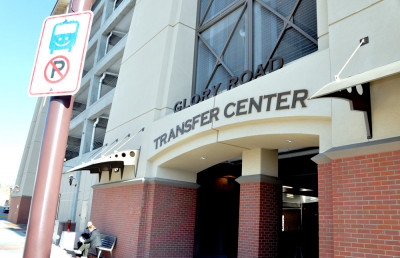 The following cost estimates were derived from past expenditures or similar projects; however, no formal estimates were obtained. As such, they are to be used for planning purposes only.

While the estimates include the sidewalk and nearest intersection, there are times when other capital projects and programs also address those related areas. As such, the final cost and timeline may vary.

Pedestrian Rights-of-Way Architectural Barriers (Sidewalks, curb cuts**, and pedestrian audible signals) Under Title II of the ADA, a City is not necessarily required to construct curb ramps at every point where a sidewalk intersects, install sidewalks in every area of the City or incorporate an audible pedestrian signal at every intersection.

Instead, a City is obligated to make its services accessible to everyone, regardless of someone's disability. As a result, there may be areas not 100% completed with curb cuts**, sidewalks and an APS at every intersection but the services would be deemed accessible if everyone is able to get to them, even if individuals need only travel a marginally longer route. This does not mean that the City will not attempt to continue to remove all architectural barriers, but it merely points to the overall objective of making our services accessible rather than making sure every corner has a curb ramp or every street has sidewalks on both sides.

The City will prioritize public rights-of-way projects (PROW) in the following order as required by ADA:

Note: This amount does not include the numerous capital projects that also include ADA improvements. These projects and related ADA expenditures vary from year to year.

Moving forward, this amount may change depending on budget and economic conditions, but the City will attempt to spend as much on ADA improvements as resources allow. Additionally, during fiscal years 2018-2022, there is an additional $3,000,000 allocated to pedestrian construction improvements related to Sun Metro’s Brio projects.

The above projects and corresponding expenditures are currently addressing and meeting the needs of our community to make the City’s services and programs as accessible as possible.