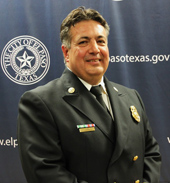 “Chief D’Agostino has done an exceptional job as Interim Fire Chief,” said El Paso City Manager Tommy Gonzalez. “When asked to submit a 100-day plan for the Fire Department, he demonstrated tremendous initiative in the areas of staffing, prevention programs and communication.”

D’Agostino has extensive experience as a fire professional and has a keen understanding of the El Paso Fire Department. He provided the City Manager with an exceptionally well thought-out 100-day plan that addressed department needs and enhanced communication. In order to keep an open line of communication and ensure support, he has reached out to Fire Union, Local 51, to receive feedback on specific programs.

“The City has many qualified men and women working for the Fire Department, and this was a very competitive process to reach today’s decision,” said Mayor Oscar Leeser. “I want to congratulate Chief D’Agostino on today’s appointment. His dedication to the department and our community is one of the many reasons Chief D’Agostino is qualified to serve as our newest Fire Chief. I am confident that under Chief D’Agostino’s leadership, the men and women of the El Paso Fire Department will continue to serve the El Paso community and ensure our safety and security.”

“Local 51 is pleased with the direction taken by the City of El Paso,” said Local 51 President Joe Tellez. “Chief D’Agostino is an excellent choice. Our members look forward to working with our Chief and the City.”

D’Agostino served as Interim Fire Chief since Dec. 5, 2016. The City Manager, along with members of the leadership team, interviewed several candidates from within the fire department who were Battalion Chiefs and Assistant Fire Chiefs. While all of the candidates were highly qualified, D’Agostino was selected due to his extensive knowledge in operations and administration.

He is a 25-year-veteran of the department who has a bachelor's degree in Fire Science, as well as a Master of Business Administration/Public Administration degree from Columbia Southern University.

“It’s an honor and a privilege to be selected as the Fire Chief of the El Paso Fire Department,” D'Agostino said. "I am humbled to serve the community of El Paso and to represent such an elite organization. It is my vision to continuously improve the services we deliver.”

The El Paso Fire Department responds to approximately 76,000 calls for service each year. The department is internationally accredited through the Commission on Fire Accreditation International (CFAI) and has a top Public Protection Classification from the Insurance Services Office (ISO), resulting in low Insurance rates for El Pasoans.